Overview of the Company

Spandan is a Sanskrit word and it means Response. As Spandana was born in response to a problem, the Organisation was named as Spandana. Spandana is a public limited company registered with Reserve Bank of India (RBI) as an NBFC MFI. Started in 1998, within five years, by 2003, it grew to the largest Microfinance Institution in India and 6th largest across the globe. In its peak, Spandana had 1,856 Branches with a presence in 10 states and a workforce of over 13,500 employees.

Spandana was founded by Mrs. Padmaja Reddy in 1998 as a Society which was later transformed into an NBFC and subsequently as NBFC MFI. Mrs. Reddy, the Promoter and Managing Director of Spandana prior to founding Spandana used to work with an NGO in Andhra Pradesh. This NGO used to help poor people to build their houses, provide safe drinking water, sanitation, health education, etc. The NGO used to raise grants from different funding agencies and implement these activities.

They offer income generation loans under the joint liability group model, predominantly to women from low-income households in Rural Areas. As of March 31, 2018, they were the fourth largest NBFC-MFI and the sixth-largest amongst NBFC-MFIs and SFBs in India, in terms of AUM. The average ticket size of the loan is Rs. 26000 and most of these loans are income generating.

In October 2010, the MFI industry was severely impacted due to external regulatory action, as the government of the formerly unified Andhra Pradesh promulgated the AP Microfinance Ordinance 2010, which enforced several restrictions on the operations of MFIs.

This severely impacted the company collections and the consequent cash-flow shortage impacted their ability to service the debt, which in turn impaired their growth and profitability. The lenders referred them to the corporate debt restructuring (“CDR”) mechanism of the RBI to develop a plan to restructure our borrowings and revive our business.

They agreed on a CDR plan with their lenders, which allowed them to get cash-flow relaxations to enable them to continue working towards portfolio diversification, process improvement, and cost rationalization. These measures helped us turn the operations profitable from the year ended March 31, 2014.

Post their exit from CDR in March 2017, they increased the lender base, diversified borrowings to new banks and NBFCs and also issued NCDs in the capital markets which results into a reduction in Average Effective Cost of Borrowing to 13.82% for Fiscal 2018 from 16.31% for Fiscal 2017.

A) Offer for Sale- The existing investors are selling 9,356,725 shares. B) Fresh Issue- The company is getting 400 Cr from the issue which will be used for augmenting the capital base and general corporate purposes. The total size of the issue is 1200.90 Cr.
DRHP of Spandana Sphoorty Financial Limited IPO
RHP of Spandana Sphoorty Financial Limited IPO

1. Padmaja Gangireddy is the Founder and Managing Director of the Company. Qualification: She holds a bachelors’ degree in science and a bachelors’ degree in communication and journalism. She attended a course on credit and micro-enterprise development from Durham University, UK, a microfinance training program from Naropa University, USA, the HBS-Accion program on strategic leadership for microfinance from Harvard Business School and an executive education program from Indian School of Business, Hyderabad. She worked at ASSIST (a non-governmental organization) for seven years and her last held title was deputy director. Award:  She has been awarded the “Women Leadership Award for Excellence in Banking & Finance Sector” presented by CMO Asia in 2018, the “Outstanding Achievement Award for Excellence in Banking & Finance” at the International Achievers Conference, 2018 and as one of the “Most Admired Leaders of Asia 2018” by Process Evaluators & Research – BARC Asia & Jury Panel, Herald Global. She has been a Director on our Board since April 19, 2003. 2. Deepak Calian Vaidya is a Non-Executive Chairman and Independent Director of our Company. He is a fellow of the Institute of Chartered Accountants in England and Wales since 1979. He has served as a director on the board of the directors of Capricorn Securities India Private Limited, Arc Advisory Services Private Limited and Chaityadeep Investments Private Limited. 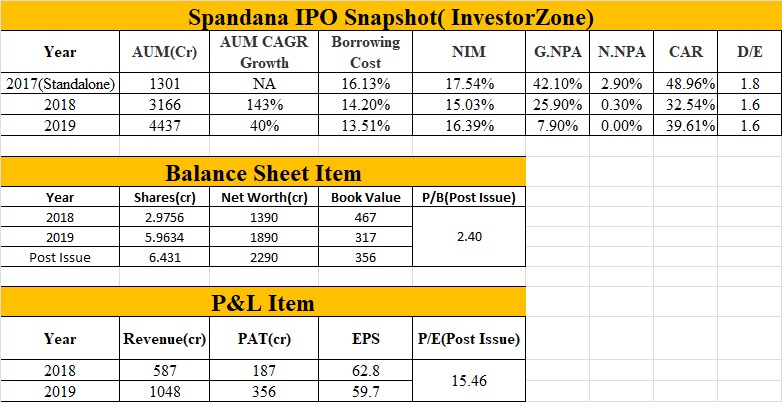 Review and Recommendation of InvestorZone is:  5/10 1. The company has been growing well in the last 3 years. Currently, 4th largest NBFC-MFI in India with AUM of 4400 Cr. 2. The recent conversion of many MFI to Small Finance Bank has opened up a lot of opportunities for the company in the sector. After becoming Small Finance Bank the operational expenses go up, which forced SFBs to shift their focus from Micro-finance space to big-ticket size loan to meet the expenses. However, as per management, they have no plan for SFBs and will focus on Micro-finance for next 4-5 years. 3. The issue is reasonably priced at P/B of 2.40 post issue. The 10-15% listing gain is possible if market sentiments do not deteriorate further. 4. The Company has a strong balance sheet with D/E of 1.43 post issue and CAR of 45% well above the regulatory requirement of 15% from RBI.

So can someone explain what happened on the first day of the Listing?? Why It wend down and came up quickly.

On a listing day many people were anticipating that IPO will list below issue price and will go more downward. So retail investors sold in a hurry which tanked the price of the share, however, the intelligent investors who knows when to buy jumped in and share just picked up. So as an investor you should know when to buy and when to sell.

ANYONE HERE WHO APPLIED FOR THIS IPO ??

Yes, I have. Let us see how it lists.

Almost everyone is expected to get allotment in this and sterling…just wondering what would happen to the ones that have applied in lower price band for this IPO?

Apply only if HNI goes past 10x.

I am not interested because market is very very poor.

Should I go for it or not?

will tell tomorrow. There is no grey activity in the market.

Though Market Condition is weak, this IPO is worth Risk Taking a the company’s fundamental is very strong. And main thing there is no GPM in the Market so chances of getting allotment is higher.

Yes, I am applying in it.

They have zero NPA . The CEO was very confident. They had committed one mistake which had hit them badly that was exposure of AP they were hit by change of Law in AP. She accepted companies mistake. Now they have pan India presence. They will not go for SMALL FINANCE BANK as they fill it’s very competing. 40 percent capital is their own rest is borrowed from banks. Believe md friends if it wasn’t bad market condition this could be MULTIBAGGER.

Anchor allocations are as below:

*₹ 14 cr* each to: Theleme, Birla Life Insurance and others

Andhra Pradesh-based Spandana Sphoorty Finance Company is likely to become the second microfinance player to list in the local equity market as it plans to raise ₹1,200 crore through an initial public offer (IPO) which will kick off in the first week of August, including an offer for sale by existing investors worth ₹800 crore.

Currently, CreditAccess Grameen is the only listed micro finance company after IndusInd Bank acquired Bharat Financial Inclusion in June. Padmaja Reddy, founder and managing director of Spandana Sphoorty, said the funds raised will be used to expand the company’s business and shore up its capital position.

“We plan to open 70 branches this year to expand our business. We will also maintain a higher than required capital buffer,” Reddy said.

As of June this year, the company had a network of 929 branches across 16 states and one union territory in India.
Microfinance companies have to maintain a minimum capital adequacy ratio (CAR) of 15%. Spandana’s current CAR is 40% which is likely to improve to 44% after the issue. Spandana expects to maintain its CAR at 25%.

“Our previous experience has given us two lessons: one, to have enough geographical diversification, and second is to have enough capital buffer. This issue will help us achieve both,” said Abdul Feroz Khan, chief strategy officer at Spandana.

Spandana was admitted under corporate debt restructuring after losses and defaults due to a law passed by Andhra Pradesh in 2010 capping the interest rate these companies could charge and tightening the guidelines for loan recovery in the sector. Spandana’s total loan book, which was ₹4,500 crore before the law was passed, fell to ₹600 crore in 2017.

However, the company exited CDR in 2017 and successfully raised $100 million equity from a consortium of investors led by Kedaara Capital.

A total of 96 lakh shares will be tendered in the offer for sale led by Kedaara which will tender 60 lakh shares to reduce its stake to 40%. Padmaja Reddy will also reduce her stake by 2.5% to around 17.5%.

“Microfinance has a big opportunity in a country like India which has a vast rural population. Lately, banks have been attracted to this space because of its high yields and priority sector tag. But these companies have an edge because they are on the ground, know the market better and can keeping operating costs in check,” said Deepak Kumar, analyst at Narnolia Financial Advisors.